How will a blockchain revolution end according to WTO? - FFC Media

How will a blockchain revolution end according to WTO?

World Trade Organization (WTO) has analyzed perspectives of blockchain technology. According to its outcomes, an annual volume of operations accompanied with blockchain will reach $3 trillion in 2030.

The Organization’s report has covered such spheres as trade operations, logistics, government procurement, insurance and protection of intellectual property rights. 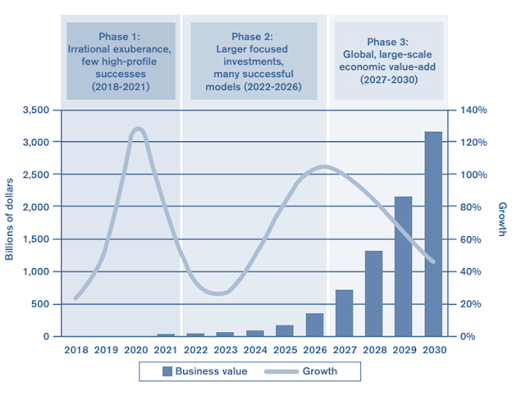 Forecast of the economic effect from the use of blockchain technology. Source: WTO, 2018.

This is a way how a situation in each industry will develop according to WTO. If you don’t want to read a lot, go to the last section — it contains a brief squeeze from the WTO report.

The WTO focuses on the inefficiency of trade operations, which are still paper‐based. A good example is a Maersk test carry of a container with roses and avocados from Kenya to the Netherlands. It was made in order to evaluate a workflow process in international trade.

30 companies with more than 100 people were involved in the operation, and the number of interactions between organizations exceeded the number of 200. The whole process of transportation took 34 days including 10 days of downtime due to long paperwork with 1 important document lost during the process.

The payment process is also complicated as only a small part of international trade deals are concluded on 100% prepayment. Most transactions are financed through a letter of credit or factoring. According to The Boston Consulting Group, standard financing of a trade transaction require involvement of 20 organizations on the average and from 10 to 20 documents, for which about 5000 different data facts are needed. Only 1% of this data has value for the transaction. As a result, the whole document flow on a trade transaction can be considered very cumbersome. 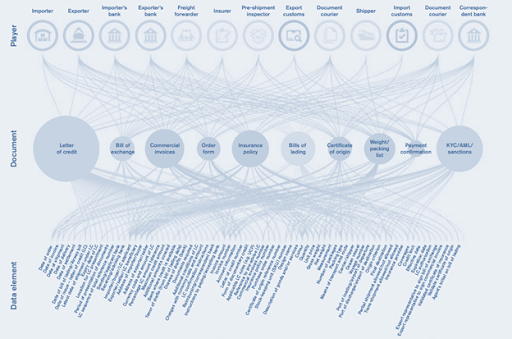 According to the WTO experts, the blockchain makes it possible to get rid of paperwork and reduce the cost of financial transactions in a trade by 15 – 30 percent. There are already existing precedents for the commercial use of the technology. In September 2016, Barclays Bank and Fintech Startup Waves have completed the first transaction on the blockchain. They have arranged to finance for the supply of cheese and butter worth $ 100,000 from Ireland to Seychelles. According to Barclays, the time of the letter of credit execution was reduced from 10 days to 4 hours. The future is definitely for paperless operations.

Nowadays the service sector accounts for about 60% of world production and employment. According to the WTO, trade in services has become the most dynamic segment of world trade over the past two decades, which is growing faster than trade in goods.

The WTO also reported that 70 percent of financial institutions have already experimented with the use of technology. Cross‐border payments are one of the areas where the blockchain may give the strongest economic effect, speeding up transactions, leveling currency exchange losses and reducing transfer fees. The $ 99 million transaction through the Litecoin network has taken two and a half minutes with only 40 cents of a commission.

Protection of innovations and intellectual property

Blockchain can provide authors of digital objects or artistic works with immutable proof of ownership. Digital works can be registered in applications using blockchain technology. In the case of trademarks, registration on the blockchain eliminates disputes about first use, fixing this precedent (proof of first use).

Regarding patent law, the regulation is more complicated. Nowadays, it is registered at the national and regional level in more than 200 government agencies around the world. There is no talk about developing a worldwide database of patents. However, inventors can record the start of the patent registration process with the support of blockchain which may protect them from competitors breathing in the back.

The volume of the global government procurement is $ 9.5 trillion. Corrupt and full of bureaucracy, this huge economic sector clearly needs to be improved.

The legislative basis for introducing blockchain into the sector is the WTO Agreement on Government Procurement, which came into force in April 2014. It encourages the use of electronic systems and requires that procurement should be carried out in a “transparent and impartial manner” to “avoid conflict of interests and prevent corruption practice».

In this area, the blockchain may form a safe ecosystem for trading and maintain records of procurement tenders. According to the agreement, records of the auction should be kept for at least 3 years. In addition, it becomes possible to automate purchases using smart contracts. The United States, Japan, and the United Arab Emirates are testing these systems at the moment.

How to overcome is the ordinary question for blockchain startups. A possible solution lies in applications based on Sharding or Plasma Cash technologies, which is interesting for such visionaries as, for example, Vitalik Buterin. Other challenges identified by the WTO include huge electricity cost for network maintenance and security issues, including the risk of “51% attacks”.

Who will be the engine of progress in the field of trade?

Large corporations are already engaged in the technology commercialization in international trade processes. TradeLens is a supply chain management platform created by IBM in partnership with global container shipping leader Maersk, which allows you to track cargo and manage supply chains. Sounds promising? However, over the 10 months of operation bring only one new carrier Pacific International Lines (PIL) on the platform which is not even among the top 15 global logistics operators.

What is the reason for such a disappointing result? Simply saying, it is difficult to develop technology and scale it among competitors when you own a platform and centralize processes.

Vitaly Buterin in his recent interview explained that IBM is doing just that, and the company’s product may not be successful.

Most likely, large companies will eventually come to the use of DLT from independent blockchain projects that will have increased competencies by that time. Projects like IBM are also needed because they increase the technology adoption among big business and contribute to the further spread of technology in industries.

It is important that the WTO report highlights the areas in which solutions on the blockchain are needed now. Entrepreneurs should pay attention to them:

Monitoring data in the supply chain in conjunction with the Internet of Things technology. Retailers and transport companies have already paid attention to the blockchain to manage the supply of goods, conducted the first pilot projects. The results show a significant reduction in the cost of goods quality control and transportation, which prompt the major players to action. For example, Alibaba has already launched a blockchain service to track food delivery. Now many of them are faced with a dilemma: to develop and manage a blockchain solution independently or to attract partners for coöperation and integrate their solutions.

Contract execution using smart contracts. According to IBM, this may reduce paperwork and save up to 15% of the cost of shipping by sea, and the full implementation of electronic document interchange will reduce the global cost of maritime freight by $ 38 billion annually.

Access to trade finance for small and medium businesses whose requests are rejected in 50% of cases. The blockchain solution as an independent system for verifying data on the company’s creditworthiness may be beneficial both for small companies and their creditors. In addition, there is a request for infrastructure solutions for interacting with banks to obtain trade finance, such as the We​.trade platform.

The WTO also notices the prospects for the use of the blockchain in the insurance and e‐commerce sectors, including decentralized marketplaces creation.

Here is what we understood after the WTO report analysis:

The most promising areas for blockchain application:

Special improvements to increase the speed of the blockchain are already developed and may be implemented. Pilot projects for the introduction of technologies «sharding» and «plasma cash» implementation prove that time and cost of operations can be reduced. Many teams are working now on the technology improvement.

The blockchain under the bonnet of trade finance may allow the traditional industry to work much faster. New technology in the traditional market has shaped new expectations with increased market volume involved as WTO estimates the volume of blockchain‐involved trading operations in 3 trillion dollars by the year 2030.