Top trends in blockchain industry in 2019

We don’t pretend purely objective. Moreover, we can be mistaken. However, we draw conclusions from what we see in the industry and extrapolate trends. For all skeptics we say: “the trends we see is the future we expect”. Let’s go.

Blockchain is probably the most fashion‐forward technology of 2018. And also also magical, by the way. Just look back to the situation how the British On‐line Plc decided to add the word “Blockchain” to the name and then its stock prices soared by 400%. However, the prices have collapsed soon like the entire cryptocurrency market, but the blockchain remains solid. The fact is that blockchain is not a business, but a technology. The technology may be profitable to those who use it efficiently and appropriately.

First, let’s look at the key events in the blockchain industry in 2018.

The tragedy is that about 80% of ICOs turned out to be fraudulent. Fortunately, not all the money transfered to the scammers (some of the funds were returned), the amount of the stolen and lost funds is impressive.

A similar situation was with the dot‐com bubble at the beginning of the century: about 90% of the projects have collapsed. But Facebook, Yahoo, Amazon, Google, and other companies which have become today’s giants had risen from the ashes of the dotcoms. So the same scenario may be applicable to the blockchain project market. «Google‐on‐blockchain» can be easily hidden among the survived projects. And if you have invested in it, luck is waiting for you.

STO is Security Token Offering which defines a sale of security tokens.

Such ways of crowdfunding raised a wave of 2017 and the decline of which we observed throughout the 2018th.

But selling security tokens is a complicated process due to an increased attention they have caused to regulators in different countries, especially the American SEC. The fact is that security tokens are analogous to traditional companies’ shares, which selling process is strictly regulated. Violation is punishable by law and no disguise has helped to sell security tokens as utility ones.

Now IEO came to the scene. This is Initial Exchange Offering, the process of selling tokens on stock exchanges. The procedure of stock listing will probably bring market participants to clean water as KYC and AML are essential parts of every IEO.

Crowdfunding is moving towards investing classics. We will not be surprised if it finally turns out that venture financing is enough. To look into the eyes of the founder is a nice option, isn’t it, Mr. Investors?

3. The number of countries with cryptocurrency regulation has increased.

Last year, cryptocurrencies have attracted the attention of financial regulators in 130 countries. Hallelujah!

Although cryptocurrencies were generally prohibited, they firstly appeared in the official legal field. Even such step is a good one for a start. This situation has happened with a lot of things before. First, they are forbidden, then the restrictions are weakened, and in the end they are completely removed. Time will say, and the market will judge.

According to the Library of Congress report, cryptocurrencies were allowed in 16 countries and completely banned in 9 countries of the world in 2018. We believe that this proportion will change in the direction of technological progress in the future. 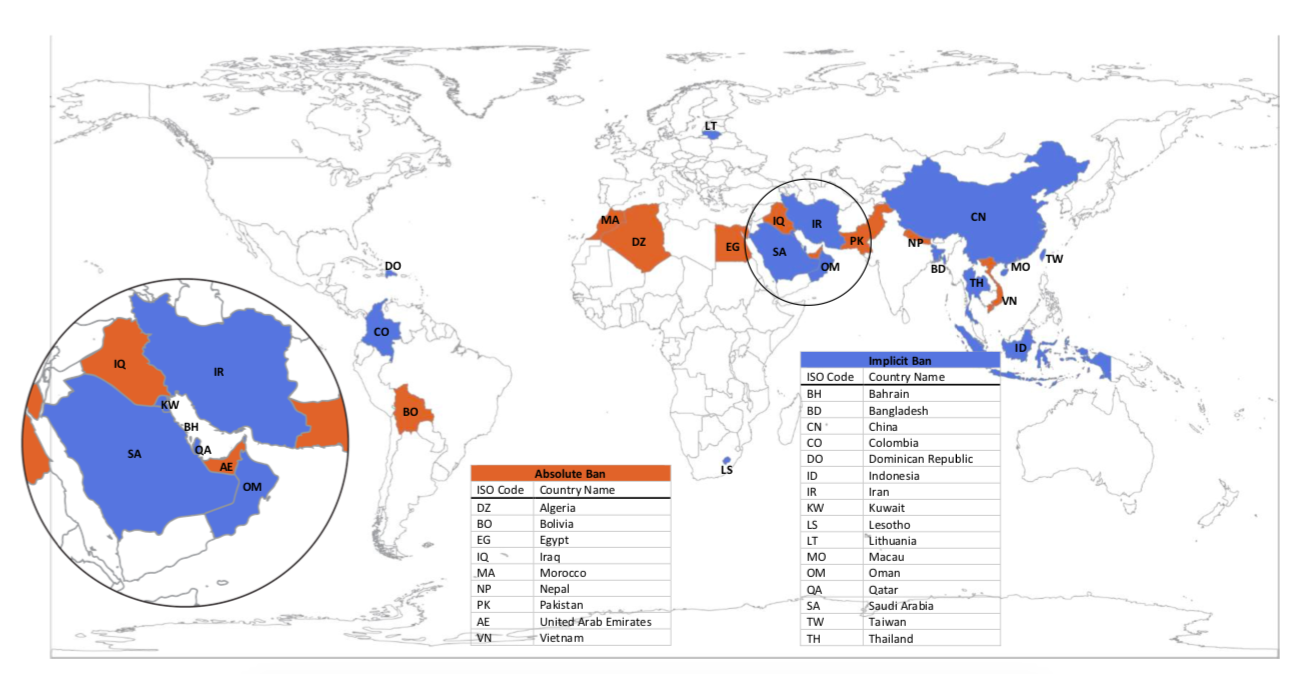 Cryptocurrency on the world map. Library of Congress

4. Blockchain projects began to seek the patronage of fat cats.

The blockchain industry is developing thanks to the governments and large corporations due to their financial resources which can be accumulated for projects’ development. Fat cats have a lot of money, that’s why projects close to fat cats stayed afloat.

Nasdaq, IBM, Hitachi and other large corporations are exploring the capabilities of distributed ledgers for their business purposes. The consensus opinion of the companies’ executives investigating the blockchain can be formulated as follows: the only real mistake that can be made regarding blockchain is to do nothing. Details can be found in Deloitte report.

Forbes American experts believe that in the next decade, 10% of global gross domestic product may be generated on blockchain platforms.

The WTO thinks in the same manner. It associates the trade industry development with blockchain technologies. We have analyzed its 2018 report and briefly outlined the main points of the report in the article “How will a blockchain revolution end according to WTO”.

And now our forecast.

Top Trends in Blockchain Industry for 2019

1. Venture capital will return to the industry. Everything returns to normal. The wave of “simple” ICOs has subsided and the time of STO has passed. Organizing IEO (financing through exchanges) is almost as difficult as conducting an IPO. Good old venture — the optimal ratio of the cost of capital to the cost of its attraction.

2. We will see a lot of M&A deals. For example, Citi and Credit Agricole banks have acquired a stake in the SETL blockchain startup which works under support for calculations based on distributed technology. Large institutional investor Digital Currency Group participates in Revelator startup, which manages digital copyrights. Shell bought Applied Blockchain to use it in its own business. Fat cats will continue to acquire small and effective cryptoprojects.

3. The distributed ledgers technologies will be more widely used for accounting of financial transactions. Banks, financial brokers, exchanges (especially crypto exchanges) will increasingly use DLT in traditional business. They have nowhere to escape because blockchain does not allow them manipulating reports and changing documents retroactively. Self‐respecting structures will use a distributed ledgers to ensure transaction immutability. The use of the blockchain may become a “quality mark” for financial companies over times.

4. Blockchain‐as‐a‐Service model will become a driver of industry growth. Obviously, using the “boxed” technology from the cloud is easier than creating your own blockchain architecture. Many services are provided on cloud technology nowadays and blockchain is no exception. This trend is confirmed by the fact that Intel, Microsoft and Amazon are already offering blockchain‐as‐a‐service solutions. Big players get involved only in big stories.

Meet in a year.

How will a blockchain revoluti..