What financial whales try to hide for criticism of the blockchain? - FFC Media

What financial whales try to hide for criticism of the blockchain?

The financial bigwigs have an ambiguous attitude towards cryptocurrencies and the blockchain. But even when they harshly criticize new technologies, they do not miss the opportunity to fill their pockets with them. That’s how it happens.

Western Union were dissatisfied with testing, but they issued the patent just in case

Blockchain gives you the opportunity to conduct instant and cheap transactions anywhere in the world. So, in April of this year in the network Litecoin transferred about $100 million for 2.5 minutes and a commission of 40 cents, and in October in the network Ethereum transferred $180 million for only 6 cents. Read more about cheap international transactions in our article «Advantages of blockchain for banks».

Calculation of the cost of transfer to Ukraine, Western Union website

Here Western Union, a leader in the market of international money transfers, should think: is it their transfer fast and cheap enough? But no. For example, to send 100 rubles from Russia to neighboring Ukraine through Western Union will cost the same 100 rubles!

And if you need to transfer a million dollars (God forbid everyone)? Then you have to spend hundreds of payments long and tedious, because from Russia you can send a day no more than $5,000, and it will lead for months and years. And the commission for such transfers will comparable to the amount of transfers.

And Western Union does not agree on something. In February 2018, the company officially confirmed that it is exploring Ripple’s opportunities to improve the efficiency of international money transfers. But for 6 months of testing the technology, the head of Western Union Hikmet Ersek did not see a real saving of money.

«We are often criticized for the fact that Western Union is inefficient from an economic point of view. However, during the testing of the Ripple network, we also did not see the effectiveness. We did not see any real cost reduction. Of course, we intend to continue testing the system to have a full picture,» — said Ersek.

Western Union CFO Raj Agarwal also said, that the project is at the testing stage, and so far the company has not found anything in the blockchain that can be considered a «major find». Well, of course, because the cost of transactions in the ripple network is a few cents, and Western Union takes a commission of $ 1 to 4% of the transfer amount. In the case of micropayments, the commission can be compared to the amount of the transfer. Here is such a savings.

In Ripple this situation commented on so:

«If they (Western Union) transferred large amounts of funds, perhaps, they would get the desired effect. But after only 10 transactions, it is no wonder that there is no obvious savings. The company makes millions of transactions per month, and I’m not surprised that 10 transfers using our solutions did not show amazing results.»

Western Union conducted only 10 transactions on the blockchain, but the patent for the use of blockchain technologies was still issued. The company has patented a cryptocurrency transaction management system that guarantees confirmation of the transfer via biometric verification.

There are 2 surprises in this patent:

At first, it says that the transfer system is suitable for cryptocurrency systems such as Bitcoin, Litecoin or Peercoin. I wonder what that would be for? After all, Western Union says it has no plans to work with cryptocurrency.

And the second: they filed an application for this patent 2 years ago, that is, the company’s interest in blockchain did not arise yesterday. And registration of the patent on terms just coincided with the end of 6‐month testing of Ripple technologies.

Western Union is a company with a rich past. It was founded back in 1851, and in 1876 Alexander bell, the inventor of the telephone, offered William Morton, Director of WU, to buy a patent for the telephone for $100,000. In response, Orton called the phone a toy and wrote a note:

«At first glance, the idea is really idiotic. Besides, who would want to use this clumsy and impractical device if you could send a courier to the Telegraph office and send a clear written message to any major city in the United States»

Let’s rephrase on the subject of blockchain:

«At first glance, the idea of using blockchain is really idiotic. Who wants to transfer money instantly and almost free of charge anywhere in the world with the help of blockchain, when you can go to the Western Union branch, stand in line and send a payment, overpaying only 2 times?»

The management of payment giants Visa and Mastercard looks at the blockchain with poorly concealed discontent. Here’s what the esteemed Ajay Banga, CEO of MasterCard, said in October 2017:

«And all that you like, there are all sorts of bitcoins-it’s trash, remember. Transparency? You can all, online, see how and how much is printed dollars, euros and other paper tugriks. Everything is under control, everything is transparent».

And he seems to be serious.

Despite this, the last few years the company has been developing its own blockchain, or «its vision of bitcoin technology», and in October 2017 it became available to customers as an alternative method of payment for goods and services.

In the summer of 2018, Mastercard patented a system for anonymous transactions in blockchain networks, in September 2018 filed applications with the us patent office for the use of distributed registry technology to account for consumer payments, in October 2018 won a patent for a system that allows you to run different types of blockchains. In General, the blockchain patents have a Mastercard enough.

Visa Director Alfred Kelly is more cautious in his statements, but his words have the same rhetoric: we are doing well without your blockchains:

Soon, Alfred Kelly, who does not like to talk too much about blockchain and crypto — currencies, said: «processed 130 million transactions per year (this is about transactions in the bitcoin network‐approx. author) mean absolutely nothing to a company capable of handling 100 billion payments and transactions.» And in June 2018, he also said that bitcoin is not a payment system at all. And at the same time he added that no bitcoin can become a killer Visa. Such a delayed response a bold statement Baterina.

Visa’s throughput of 24,000 transactions per second is powerful. And most of the existing blockchain systems do not yet reach these indicators. There is only one snag: to confirm such a high bandwidth Visa can not.

There is a version that in reality the network processes only 1700 transactions. And many startups are now developing a blockchain network with a capacity of 100,000 transactions per second and above, and unlike Visa, in the blockchain, these figures can be confirmed. So the hegemony of Visa and Mastercard may soon be under big question.

Despite the fact that Visa «everything is fine», in 2016 the company tested the blockchain technology together with several banks, and in October introduced a digital identification blockchain system for international money transfers between B2B Connect companies. The platform based on Hyperledger Fabric technology will be launched in the first quarter of 2019.

Well, that’s good, but blockchain can get even better. Only aloud about this VISA does not prefer not to talk.

Gref changed his mind about the blockchain, the savings Bank — no

I must say that Herman Gref is a big fan of modern technologies. In 2017, the progressive thinking Of the Chairman of the Board of Directors of Sberbank gave rise to a popular meme: 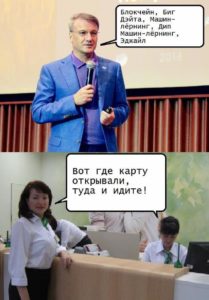 In the same 2017, Gref predicted a huge shift in the economy, thanks to the blockchain. Then he said that in 5 – 10 years, thanks to the introduction of this technology, there will be significant changes, and urged young people to study the blockchain. Moreover, German Oskarovich was not even sure that Sberbank would find a place in the world of digital economy:

— I ask, whether there will be a savings Bank after the technology is Mature. This is a very big question, which of the types of businesses in General will remain, he said.

But in April 2018, Gref called the blockchain an immature technology, losing the technology of artificial intelligence: — we see that the maturity of the blockchain technology is still not enough to rank it among those technologies that can already change our lives today.

Opinion has changed 180 degrees in just over six months. Nothing, with Gref and not such happened.

But Sberbank is not going to change its mind: in November 2017 the Bank held the first payment transaction in Russia on the IBM Blockchain platform, in January 2018 opened a blockchain laboratory, in may Sberbank CIB and MTS issued bonds with settlements in rubles on smart contracts based on the blockchain platform. Even the savings Bank has conducted a trial of ICO and will produce tokens on the blockchain. Read more in the article «how Sberbank will help clients to help Sberbank». It remains unclear why Mr. Gref had a fracture of consciousness, and why this did not affect the plans of Sberbank.

Training of Sberbank on the blockchain

In the words of one, in fact, different

To criticize the cryptocurrency and blockchain has become especially fashionable in recent years: some Rubini pearls in the us Senate are worth. But the largest payment systems, banks and corporations are headed not by theorists, but by businessmen who are used to looking for their benefits in everything. Therefore, their statements about the blockchain look like an attempt to create a smokescreen: on the one hand, the sharks of capitalism depict disinterest and scold the technology. On the other hand, they are introducing blockchain into their business by all means.

Questions to the Norilsk Stabl..

How Sberbank to help customers..