How to get blockchain education in the USA, Europe and Asia - FFC Media

How to get blockchain education in the USA, Europe and Asia

Corporations, banks and state institutions are interested in blockchain. Blockchain specialists are desperately lacked, and their salaries are going through the roof. We have collected information about universities in the USA, Europe and Asia, which train specialists in blockchain. If you are thinking where to explore the blockchain, here’s the article.

Leading blockchain specialists and specialists in cryptocurrencies have already received at least $ 250,000 a year, — says Jerry Cuomo, vice president of the blockchain division of IBM. According to him, blockchain is one of the highest paid categories among software specialists.

Here’s how to get educated in the field of blockchain in different countries.

MIT and Stanford offer the most advanced courses on blockchain.

Stanford University offers more programs to study blockchain and cryptocurrencies. Students of all specialties and all levels — bachelor’s, master’s, MBA can attend an open course on blockchain in Stanford.

The research center of blockchain with the support of the fund the Ethereum opened in 2017 at Stanford University. It is headed by computer science Professor Dan Bonea and David Masters. One of the tasks of the center is to prepare courses for students, so that in the future there will be more programs on the blockchain.

— to complete application,
— to pay a registration fee of $90,
— to pass the SAT texts on 1390 – 1540 points and ACT on 32 – 35 points and TOEFL on 100 points,
— to have an average point in all subjects (GPA) at least 4.8,
— to provide a school certificate and a report on academic performance for six months, a statement from the school and the recommendations of two teachers,
— to write an essay on a given topic, a motivation letter and provide a portfolio.

There are many opportunities to learn blockchain in the States, but also it has the highest competition: for example, in Berkeley, the course «Blockchain, crypto‐Economics and the future of technology, business and law» is designed for 70 people, but has 250 applicants. 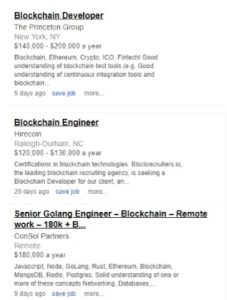 Jobs blockchain specialists in the United States. Information from Indeed​.com

How to enter the magistracy:

— to have a UK recognised diploma in a specific field,
— to submit an application, demonstrating the computer programming skills,
— the motivation letter,
— to confirm the knowledge of English by international language tests TOEFL and other international certificates not older than 2 years.

How much does it cost. Payment depends on the chosen specialty. For example, at Design Informatics you need to study the year; the price is £ 13,000 for EU residents, and £ 30,000 for residents of other countries. In other specialties you can study for 4500 pounds per year, but it has the part‐time training and leads for 2 – 3 years.

It is possible to study through postgraduate credits and scholarships for students from Scotland /ЕС.

The University of Edinburgh offers online distance learning opportunities as well as free mini courses in many specialties, but there is no blockchain among these programs.

The blockchain courses are also taught at the Swiss higher technical school of Zurich (Swiss Federal Institute of technology Zurich).

The salary. The salaries of blockchain specialists in Europe start from 30 000 euros per year, experienced specialists receive from 100 000 euros and above.

Vacancies of blockchain specialists in Europe. Information from the site cryptojobslist​.com

The National University of Singapore (NUS) has its own blockchain laboratory and several courses on blockchain.

Language: it is possible to study in two languages or to choose the language of instruction. For foreigners is English.

— to have a full secondary education for at least 12 years, including 10 years of school and 2 courses at the University,
— to pass tests from IELTS from 6.0, TOEFL from 98,
— to provide the result of SAT I and SAT II,
— to provide the characteristics of teachers,
— to pass an interview (for foreigners it is possible via Skype).

Non‐academic merit is also taken into account. Other tests also may be required, depending on the faculty and specialization.

How much does it cost. The cost of training at the faculty of information technology and the faculty of applied Sciences — $ 36 000 per year. It’s the baccalaureate. 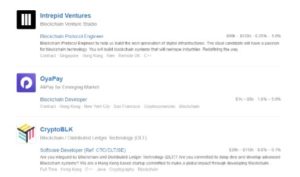 Salaries of blockchain specialists in Asia. Information from angel​.co

In addition to studying at the University, you can study on your own. There are many online tutorials and courses of blockchain. As a rule, they are designed for people who have a background in the field of IT, mathematics or programming.

For example, the Coursera platform with Princeton University has been conducting a free course on cryptocurrencies for 11 weeks since 2015. The course is available in English.

The California University Berkeley has developed a 6‐week Blockchain Fundamentals course that can be passed for $178.

There are also IBM Blockchain Foundation for Developers courses from IBM DeveloperWorks, and Blockchain for business from Linux FoundationX.

What I will have as a result

Judging by the number of projects that are developed on the blockchain by corporations, banks and governments of different countries, the demand for blockchain specialists will only grow on the horizon of 5 – 10 years.

Blockchain — the guardian of y..