2800+ people attended the two‐day conference, including potential investors who participated in EXP20 — a business pitch competition for startups. The most visiting experts predicting that cryptocurrencies and blockchain will fare better in 2019.

— Singapore is not only a fintech, but also a blockchain center of Asia. Hundreds of blockchain companies, offices, communities are registered here. A year has passed since the first BlockShow Conference in Singapore and now returning back we can see how everything has become more active! The increasing number of companies is obvious and most importantly — ICOs predominated last year, while now we can mention the growth of product companies. The place is the same, but there are more people, projects became more stable, serious and Mature. 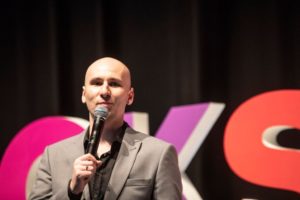 We have chosen three projects that offer solutions on the blockchain for energetics, retail and ecology.

TreeCoin which is led by its CEO Jörg Schäfer is creating an ecosystem with two currencies, i.e. one based on the natural tree and the cryptocurrency (TreeCoin/ TXC) that will be used as a pay coin on network. The participants will be able to directly invest into the afforestation project by purchasing land for planting trees while using the TreeCoin cryptocurrency as a cheaper and better alternative for tracking transactions.

TreeCoin aims to make a significant, lasting contribution to restoring forest abundance. This way, TreeCoin ultimately strives to enable a greener, healthier future and plans to stop global warming – step by step, starting with areas of Paraguay, where deforestation rate has reached the critical mark of 85%.

For the past 10 years, TreeCoin has been working with other local partners in Paraguay and has so far managed to cultivate over 1000 hectares of land for reforestation.

ELECTRIFY Asia is the first retail electricity marketplace in Southeast‐Asia addressing the need for transparency and security in the consumption of energy. With a GMV of over SGD$10 million to date, ELECTRIFY has transacted more than 60GWh of electricity for commercial and industrial customers since March 2017.

The Electrify Asia team brings a wealth of experience in electricity distribution and technology to bear. The CEO and co‐founder of the project is Julian Tan, who previously worked at Sunseap Energy and who also spent time as a Research Engineer at the Solar Energy Research Institute of Singapore.

Cyclebit works to create a payment ecosystem for cryptocurrencies. Cyclebit solution includes mPOS devices, SDK/APIs for integration with third‐party hardware and online/mobile stores and cryptocurrency wallets. Project’s goal is to make spending and accepting crypto in retail and online as simple as any cashless payments today.

Cyclebit’s idea has quickly gained traction, with over 200k point‐of‐sales earmarked for imminent roll‐out. The crypto startup has also integrated with several businesses in the SEA region as well as South Korea and Europe.