Cryptosphere against Wall‐street — who is stronger? - FFC Media

Cryptosphere against Wall‐street — who is stronger?

One fairly famous character named Nigel Green, a founder of the consulting company DeVere Group, has recently made a statement blaming another well‐known persona Jordan Belfort that he’s completely wrong about Bitcoin.

The Wolf of Wall Street is pretty skeptical about cryptocurrency and thinks that bitcoin is a scam within his Greater Fools Theory. It states that “one may pay a price that seems «foolishly» high because one may rationally have the expectation that the item can be resold to a «greater fool» later”.

In turn, Belfort’s counterpart has some specific reputation on his side. Before creating DeVere, Green had worked in an offshore broker company Britex International, which sold products of one high yield investment fund. As you may have guessed, one day it stopped paying its clients. Green started his venture and bought Britex. Today DeVere Group has an excessive client base with more than 80 thousand customers in 100 countries around the world.

It can be said Green is another wolf of the financial jungle.

Nigel develops his business outside his native Britain preferring Asia, Middle East, Africa and continental Europe. His company has very aggressive style of sales where his salespeople actively make cold calls to everybody they can reach, trying to sell them their products by hook or by crook.

A few years ago DeVere headed down to America where their pushy marketing style and high fees led to the investigation conducted by SEC. The company was fined $8 mln related to its failure to disclose conflicts of interest to its retail clients.

In search of new territories to make money Green couldn’t help but put his eyes on cryptocurrencies Wild West market. He started to speak his thoughts out on the subject as an ardent advocate of Bitcoins and Ethereums. His forecasts on assorted tokens value were often cited inside the industry.

For instance, Green considers current situation as a consequence of an overheating market but thinks that soon cryptocurrency rates will skyrocket again. In April he said Ethereum price would reach $2500 by the end of the year.

It means that ETH has to grow up by 8,5 times within 4 months as the current price is somewhere below $300 and it looks like a downtrend keeps going.

He was after another token called Ripple (XRP) that will “convert the remaining crypto cynics” with its triumphant procession to the highs of the financial market. The XRP price at the moment reached critical $0.7 level adding $62 bn to its market value.

It’s quite clear why Nigel Green goes for cryptocurrency in general and for Ripple in particular. His company has released their own app called DeVere Crypto letting its customers to exchange fiat currency for crypto. Recently they started to offer 15 XRP to everybody who install their app, which may look fine. However, users gave them mixed reviews complaining on high fees and instability of the app.

No wonder if one day Devere’s consultants will begin their huge cold calls campaign offering products connected with cryptocurrencies. There are lots of opportunities to make a cash there still. It’s up to you whether to feed this wolf or not.

The advantages of blockchain f..

The continuous problems of the.. 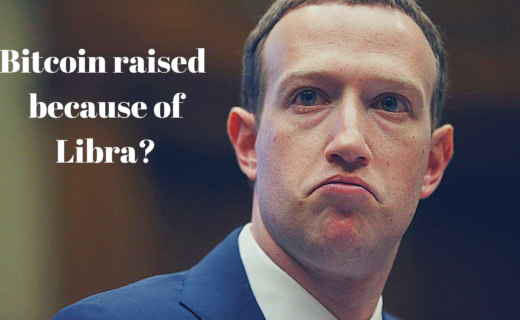 Bitcoin has raised because of Libra cryptocurrency